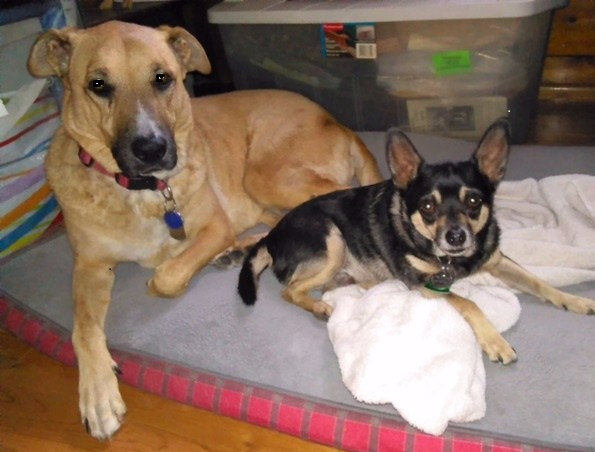 Since I got home from the hospital a few weeks ago, all my time and energy has been focused on Henry and his needs. His spine and mobility problems, which came on quite suddenly right before I went into the hospital, increased his need to pee and destroyed his ability to control some bodily functions, so whenever he stirred, day or night, we’d scoop him into our arms and carry him outside.

Sometimes he seemed like himself and would walk around the house like he used to, and in those moments I hoped he could recover.  But often, within a few hours his back would hunch and he’d start to quiver again. We were giving him the prescribed pain medications three times a day, hoping to make him feel better, but he’d still quiver and cry.

His appetite was decreasing daily, but he still perked up when we opened a  can of dog food, and if I sat with him, he’d usually finish the soupy mixture I’d specially prepared.

His oncologist suggested we see a neurologist, so we scheduled an appointment for Monday. Maybe there was more we could do to relieve his back pain. It had all happened so suddenly we didn’t fully understand what was happening with his spine, and we kept hoping it was treatable.

On Easter morning Henry had what looked like a bad seizure, which left him paralyzed on his left side. Don and I knew then that he would never get better, and we couldn’t bear to see him suffer any longer. We made the decision to take him to the animal hospital to relieve him of his pain and say good-bye. The vet who administered the injections was remarkably gentle and kind. She spoke and moved with such grace, I wondered if she was some kind of angel. Had she gone through special training that made her so angelic, or was she just gifted with tenderness?

Henry looked so peaceful as he slipped into his final sleep, and I knew he would never suffer again. As sad as I was, I felt relief for him. I was grateful that Don and I could both be there for his final moments. When Dixie died on July 5 of this year I was in Chicago with my brother, so Don had to go through her death alone.

After leaving Henry in the loving hands of the vet and going home to hug our other dog, Cassie, I was determined to gather all of Henry’s toys, uniform vests, leashes, medicines, blankets and food dishes and put them away  so I wouldn’t be reminded of him. Not that doing all of that could possibly stop me from thinking about him all the time, but it might ease the pain. I want Cassie to fill the space and leave her things everywhere so I think of her. She must miss Henry too.

There was one friend I really wanted to call yesterday after all this happened. I’ll call her N. She was a friend with whom I could share anything and everything. We originally connected when we discovered we had the same  cardio thoracic surgeon, and that we’d both had life-saving surgeries at UCLA. She was a kidney transplant survivor three times over and was dependent on catheters in various parts of her body. We could tell each other our catheter concerns or infusion nightmares without flinching. We could complain about our many doctor visits and medication dilemmas without boring each other. N always listened compassionately to my latest medical issues and I would do the same for her. We had a connection I don’t have  with any other friends.  And she loved Henry.

Just four days before we lost Henry I learned that N had passed away. She’d survived so many health problems in the 15 years I knew her, I expected she’d lived for many more. When we last spoke she said she was experiencing some unexplained dizziness,  but wasn’t particularly worried, so I was shocked to hear she had died.

In the time I knew N she had two kidney transplants, and returned to work both times. I was always impressed by her tenacity and her commitment to her job. With all her health problems I worried that she pushed herself too hard but could relate to her need to stay busy and serve others. Henry and I had the pleasure of volunteering in her office after I had to stop working, and I will always be grateful for that because like N I need to stay busy and feel useful too.

I believe N knew that Henry had passed away as soon as it happened and was there to welcome him into Heaven. My notion of Heaven probably sounds childish to my science-minded friends, but it gives me comfort to think that our souls go to a better place. I hope Henry can give N a big doggy smooch, and that she can give him a little squeeze in return.

22 thoughts on “Good-bye to good friends”